The Evolution of Technology in Sport - Hire Intelligence
Skip to content

Home > The Evolution of Technology in Sport 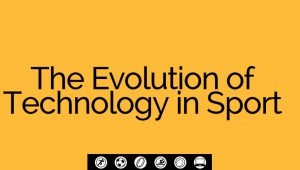 Technology is consistently changing the way we live our lives. It even impacts our sports. Through advances in technology accuracy in sport has been improved tenfold. This is providing a better experience for athletes and spectators alike.

We analysed the key advancements in sports technology and learnt so much along the way. Our findings have been transformed into an interactive guide plotting the evolution of technology in sport.

We decided to focus on the most popular sports in the UK and find out what part technology had played in their improvement.

The sports included in our interactive guide are:

In the 1950s, manufacturers started looking for ways to improve track shoes. New and improved designs were lighter and flatter, providing improved grip and fit.

By 2012, technological advances made it possible to monitor heart rate, respiratory activity, speed and weight. Athletic clothing today is now designed to manage sweat by evaporation rather than absorbing it, providing a more comfortable experience for sports professionals and enthusiasts.

In 1964, Seiko launched an electronic timing system that included a photo finish feature. This helped to increase accuracy in athletics by 1/110th of a second.

By the 1980s, transponders had been designed to track athletes’ times using radio frequencies. Then, in 2008, photo finish equipment was updated to capture up to 3,000 photos per second.

The International Football Association Board amended the ‘Laws of the Game’ in 2012 to introduce the use of GLT. This has helped increase the accuracy of the beautiful game massively. The technology was first used in the 2014 World Cup.

These days GLT is only used during European domestic leagues and other major international competitions.

There are plans to introduce video assistance referees before the 2017–2018 football season. They will be used for crucial decisions like goals, red cards and penalties. Testing is currently under way and the results will determine if and when we see this in practice for the first time.

Back in 2010 the Bradford Bulls became the first rugby team to try out GPS tracking during a match. This enabled the capture of data like players’ statistics and areas for improvement.

Now these sensors are more commonplace and are used by most professional rugby teams in Europe. Players simply wear them under their jerseys during a match so they can track things like heart rate, field position and energy levels.

Video referees were introduced in 2001 by the RFU as a way to determine if a try had been scored.

In 2015, Hawk-Eye video review software was employed by the television match official to improve decision making. This saves the producers from rewinding coverage and analysing camera shots before they can make a judgement call. 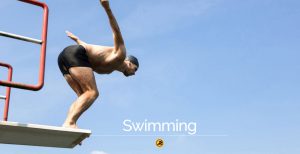 Orad Hi-Tec Systems introduced its virtual imaging technology in 2000. Their Virtual World Record Line has become ubiquitous at professional swimming trials and events. It works by creating a superimposed line on the surface of the pool to illustrate current world records.

Other software like Virtual Flags help swimmers stay in their lanes and keep on track.

If you’ve been watching this year’s Olympics in Rio then you’ve no doubt seen the diving competitions. The coverage brings you up close and personal to the sport. That’s all thanks to the Drop-Gravity ‘Dive Cam’. The technology was released in 2008 and helps to steadily film each diver as they take the plunge.

This is made possible by a camera that sits in a 50ft tube which moves above and below the water level. This approach provides clear and smooth footage of dives in linear motion. This way the camera is always in line with the diver, providing a better viewing experience for spectators and review footage for divers. 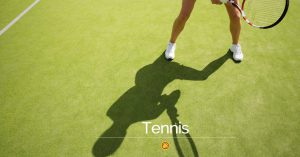 The introduction of an electronic computer system that tracks the trajectory of tennis balls and then maps their path as a moving 3D image first came in 2011.

This is produced by a series of high-performance cameras which track the ball from all angles.

Then, in 2006, Hawk-Eye technology was used in tennis matches. It enabled players to challenge a number of umpire decisions that they weren’t able to before.

During the 1991 Wimbledon Championships, technology giants IBM launched their serve-speed technology. Two radar sensors placed at the baseline of each side of the court measured the speed of each ball as it was hit. This provided invaluable information on each player’s serve. 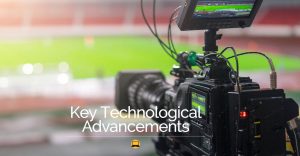 There have been so many technological advancements in sport over the years. The most notable improvements have been:

These technical advances have helped improve accuracy in sport which has led to more coverage of events around the world via TV or internet-enabled devices. Athletes can easily track their progress while spectators are getting more insight into their favourite sports than ever before.

To find out more about the advances of technology in sport check our interactive guide.