What is the Microsoft Hololens? | Hire Intelligence honeypot link
Skip to content

Home > What is HoloLens? 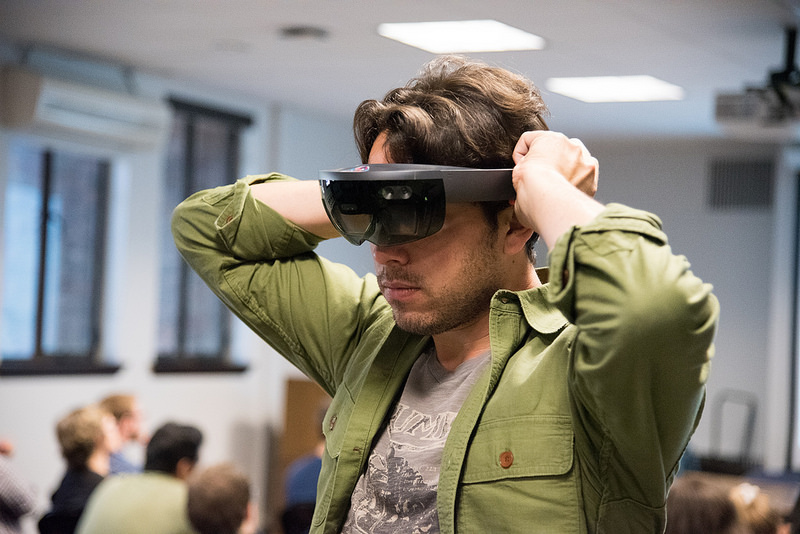 The Microsoft HoloLens is a state-of-the-art augmented reality device. When wearing the headset, the user can see 3D images couched in the real physical world that surrounds them.

The HoloLens’ image is projected onto the glasses using specialised 3D projectors. The attached speakers are not so overpowering that they smother background noise, facilitating real-world interaction. Users can move around and manipulate the projection with their hands. Multiple users can have a shared 3D experience at the same time.

If you’re wondering what HoloLens is capable of, then perhaps its specifications will give you a glimpse of the hardware’s power. The device boasts an Intel-built 32-bit processor as well as 2GB of RAM. That’s mighty impressive for a device that weighs only 1.2lb.

What can HoloLens do?

There’s no doubt HoloLens is innovative and fun to play with, but what are its real-life applications? In fact, it has multiple exciting commercial and educational uses across a number of industries.

Engineering software developer Trimble is using HoloLens to show structural engineers and architects holographic models of structures. It is used in the planning stage to envisage theoretical ideas. Furthermore, throughout the construction process, it allows designers to monitor construction. Aviad Almagor is director of this program. He says HoloLens helps join the dots between mentally conceived images and the tangible task at hand.

Workers at BAE Systems use the system to assist in manufacturing batteries for electric buses. The workers see a 3D image projected onto the building materials, giving them a precise holographic template to follow. This innovation can reduce production time by approximately 40%. And if you intend to use HoloLens in a factory setting, there are a number of successful applications from which you can take inspiration.

Of course, you may choose not to use HoloLens for design and manufacturing; there are a number of other useful applications for the hardware. Educational facilities use HoloLens; some universities use it to train future surgeons to complete operations. You can apply the same idea to a range of business practices, as HoloLens provides a risk-free method of learning intricate tasks.

Perhaps one of the most entertaining uses for HoloLens is for team building. There are games available for the system that foster healthy competitive relationships and help bring workforces together. In RoboRaid, for example, robotic enemies break through the walls of the room you’re in while you blast them away with a laser. It’s incredibly enjoyable for team members to watch another team member thrashing around, grappling with a seemingly invisible enemy. Enjoyable, that is, until it’s their turn to fight off the cyborg invaders.

For those in business, now is the time to stop asking, ‘What is HoloLens and what does it do?’ Instead, start asking, ‘How can I make HoloLens work for me?’ From analysing a holographic design with members of your team via Skype to demonstrating your product to clients at trade shows and pop-ups, this powerful piece of kit has a range of innovative applications across a variety of industries.