Are You Ready for the Virtual Revolution? - Hire Intelligence honeypot link
Skip to content

Home > Are You Ready for the Virtual Revolution? 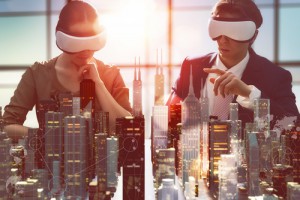 Businesses have always looked towards new technology to help them engage audiences and reach new markets. Those that adapt and incorporate the latest technological advances into their campaigns are able to approach new customers first.

One such recent advancement in the tech world is virtual reality. Having come on in leaps and bounds from the days of The Lawnmower Man and questionable graphics, VR is now seen as a viable option for businesses when it comes to marketing to and engaging with the public.

In fact, it’s grown so popular at such a rapid pace that the latest reports show there has been almost “$5 billion invested in VR within Silicon Valley alone” (Lennart Roosendaal, Director of Marketing, IC3D).

With that in mind, let’s take a look at what your business could be doing to utilise this technology and how Hire Intelligence can help.

There is a wide variety of virtual reality headsets on the market right now, from budget, DIY models such as Google Cardboard to premium, immersive headsets.

For now, we’ll explore a selection of the premium headsets, which allow users to be fully immersed in the virtual environment and therefore provide the best experience.

Here’s a breakdown of the main headsets. 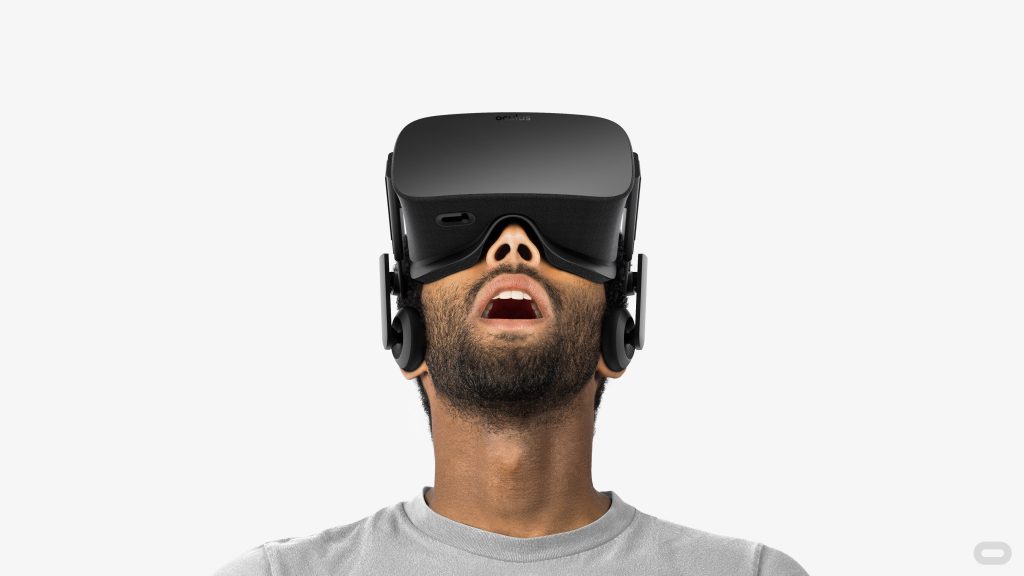 A flagship name in the world of VR, Oculus Rift uses state-of-the-art optic displays to provide unparalleled visuals to users.

In many ways, Oculus is the brand that helped launch the current obsession with all things VR. It used crowdfunding to kick-start production of its headsets, and offers different versions for developers and the general public to enjoy. The openness and accessibility of its headsets, which utilise pre-existing Xbox controllers as controls, have made the brand a leader in the virtual reality sector.

Find out more about these headsets and how you can use them for your business here.

When a leading smartphone manufacturer teams up with a leading gaming software developer, you can guarantee the result will be something to shout about. In this case, it’s the HTC Vive, a premium VR headset that uses wireless controllers with haptic feedback to provide amazing VR experiences. 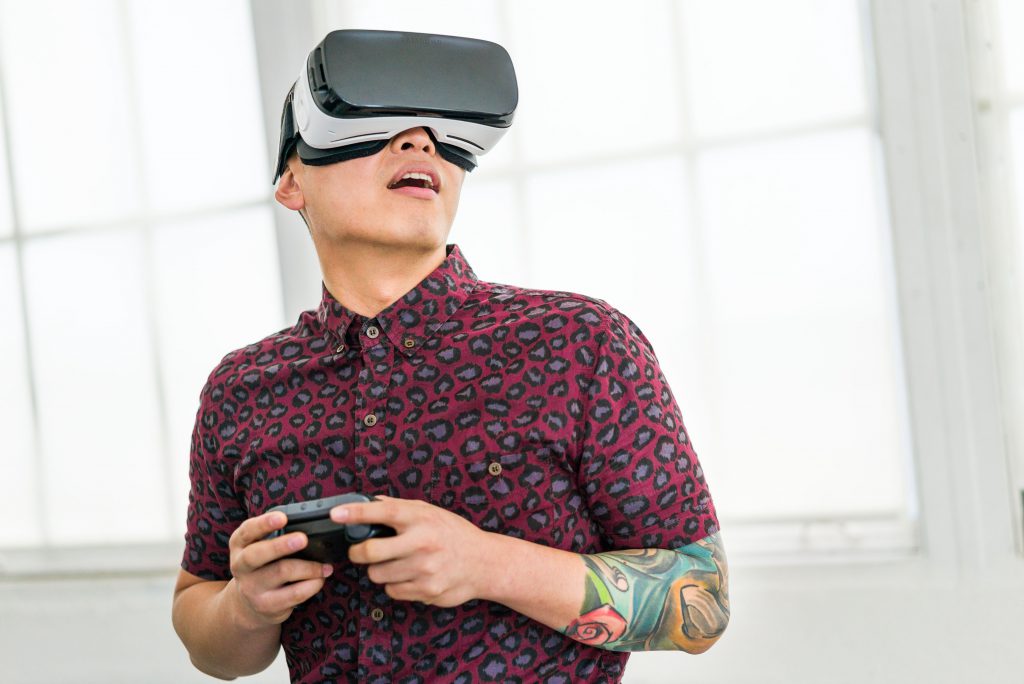 Whilst it’s not a standalone unit like its counterparts from HTC and Oculus, the Samsung Gear VR utilises the Samsung Galaxy mobile to immerse people in virtual worlds using the latest apps from the Google Play store.

Users can download a wide variety of apps created by both Samsung itself and third-party developers to their Samsung Galaxy phone and plug their device directly into the Gear VR headset, giving them a portable, accessible way to enter virtual reality from anywhere.

See how your business can use Gear VR here. 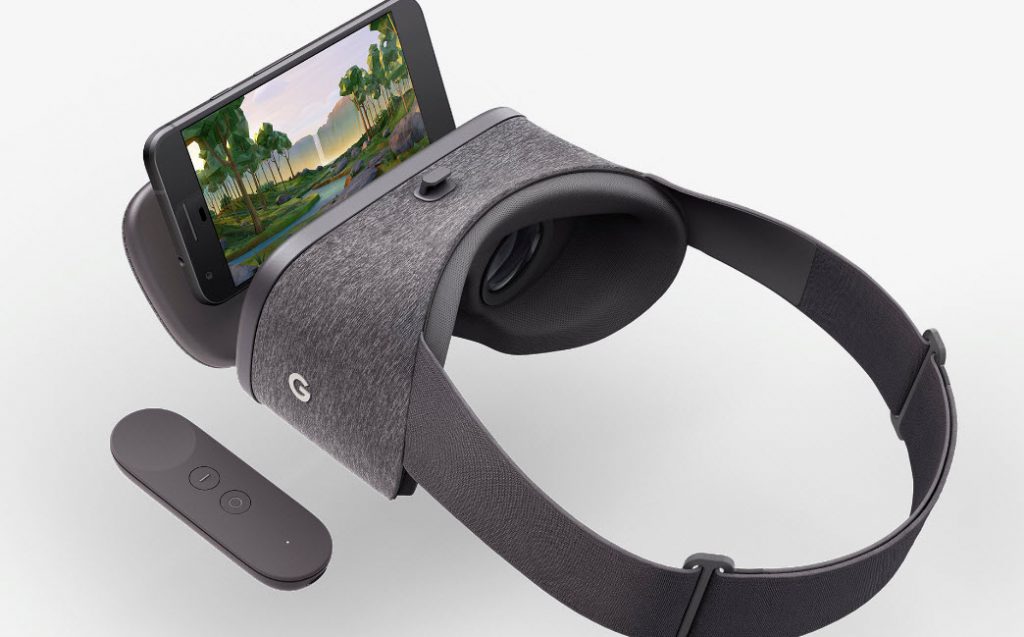 Google’s recently announced Daydream headset is slightly different from its many competitors in that it was inspired by everyday clothing and is made from breathable fabric to help increase comfort! Similar to the Gear VR, Google’s headset requires a compatible mobile to access virtual reality.

Many businesses have already discovered the countless benefits of virtual reality as a marketing platform. Whereas other advertising platforms require your audience to focus their attention and block out other distractions, virtual reality completely immerses its users. This means your message can be delivered free from the clutter and noise of the outside world. Brands can literally shape the reality around their users, allowing people to see, and experience, exactly what they want them to.

With that in mind, let’s take a look at how different businesses are using this strategy.

Thomas Cook – Try Before You Fly

Thomas Cook utilised VR in its marketing mix in a number of ways, including placing Samsung Gear VR headsets in key stores and allowing customers to explore the Pyramids in Egypt or take a helicopter tour of Manhattan.

This campaign was simple yet effective and really paid off for the brand, which saw a “180% increase in selling NY excursions after use of VR experiences” (Kudzai Manungo, Product Manager, Thomas Cook).

When Topshop wanted to open up its London Fashion Week show to a wider audience, it smartly decided that VR was the perfect medium for doing so. Using live 360 video feeds, Topshop was able to put people right at the centre of the action, offering exclusive front-row and backstage access to the show using a custom Oculus headset.

This highlights another of VR’s amazing benefits: the ability to see and (almost) be anywhere, no matter where you are. The next example helps emphasise this point further.

Boursin – Inside the Fridge

Although soft cheese isn’t something you’d instantly associate with virtual reality, Boursin set out to change this by giving users a virtual tour of what goes on inside their fridge.

It may sound strange, but offering a unique and memorable experience like this helped make the brand stand out. As a result, Boursin dramatically raised its brand awareness and won a marketing award!

Icelandic pop icon Björk helps showcase the scope of virtual reality. Whilst some businesses utilise the technology to advertise products, Björk is using VR to extend the experience of her latest exhibition at Somerset House.

Part concert, part immersive film experience, the artist is utilising Samsung Gear VR headsets to take her audience on a journey and connect with them. The headsets, which were supplied along with Samsung Galaxy mobiles by us at Hire Intelligence, will be used to showcase Björk’s collaborative VR films, including one that’s shot from the inside of her mouth!

We initially supplied the tour with 90 sets, but have since been asked to provide 90 more for when take the show across the world. This is just one example of how we can help your brand use technology like this to reach users in new and exciting ways.

VR for Your Business

As you can see, VR is now not only a viable option but also a very successful one for many businesses.

Whether you’re looking to get started on the platform and are unsure how or you’ve already developed an experience and are looking for a way to distribute it, Hire Intelligence can help.

We stock state-of-art VR headsets and accessories from leading manufacturers, including Oculus and Samsung. With specific resources available for both developers and the public, we’re able to deliver on all your VR needs.

For example, when working on a new project, developers can rent the Oculus Rift Development Kit alongside the powerful workstations we offer, giving them the ability to produce cutting-edge virtual reality applications and experiences.

Interested in finding out more? Click the link to find out more about all our VR rental products.